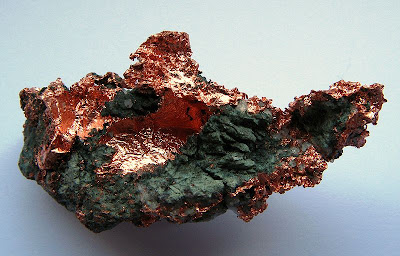 Both the planet Venus and love goddesses across cultures are associated with copper. The word comes from the Latin Cyprium aes, meaning “the metal from Cyprus”; not only was the metal famously mined there in antiquity, the island was sacred to Aphrodite. The ancient Egyptians associated the planet Venus with Hathor, goddess of fertility, beauty, and the arts. Her sacred colors were blue and green, like the life giving waters of the Nile and the green rebirth created by its annual flooding. Hathor was also the patron of miners, especially the copper mines of Sinai. Minerals like malachite, turquoise, and azurite are found near copper deposits, since they are produced by weathering, the chemical interaction of groundwater and the metal below. Because of their color and associations with copper, these were sacred to Hathor, along with the dark blue mineral lapis lazuli, imported from Afghanistan. They were powdered to produce paint and cosmetics, not only used for beauty but medicinal reasons.

Not only copper, but green and blue minerals, many of them colored by copper, continue to be associated with Venus today:

THE CHILDREN OF VENUS

Not only do the planets correspond to certain areas of life, each is traditionally associated with specific animals, plants, and minerals. For example, the 16th century German astrologer Heinrich Cornelius Agrippa lists the following materials under the rulership of Venus: (The notes in italics are mine.)

“Amongst metals, silver, and brass, both yellow and red (red brass has more copper, so is reddish in color); amongst stones, the beryl (referencing aquamarine historically, not the mineral family), chrysolite (peridot), emerald, sapphire, green jasper, carnelian, the stone aetites (“eagle stone”, a hollow geode that rattles, popular in antiquity for childbirth), the lazull stone (lapis luzuli), coral, and all of a fair, various, white, and green color.”

We know the reason for brass, an alloy of copper, and lapis lazuli. The others make sense once their symbolism is explored:

ALL OF A FAIR, VARIOUS, WHITE AND GREEN COLOR

Because of its brilliant white appearance as the evening and morning star, colorless stones represent Venus in Hindu astrology, rather than green and blue. There is a long tradition of using gems in India to counter balance problems with both the natal chart and transiting planets. Large, flawless stones, usually set in specific metals are prescribed. Each planet has a primary gemstone, if one of sufficient size can not be found or is too expensive, then an alternative in a similar color is used. The primary stone of Shukra (Venus) is diamond and its substitutes are also colorless and transparent: clear quartz, white sapphire, white topaz, goshenite (the colorless variety of the mineral beryl), and zircon.

Astrological texts rely mostly on gemstones known in antiquity. Many new minerals have been discovered, others have become readily available, and familiar ones have turned out to be more than one species. For example, red spinel was identified historically as a variety of ruby. Many other minerals now have associations with Venus:

WORKING WITH A STONE

Indian sources are very careful about selecting stones for astrological purposes, often leaving it entirely in the hands of the astrologer. Most Western sources are completely the opposite, leaving it to the reader. The sensible medium is to select something for yourself with intention. Try a few different options until you get the strongest energetic response. You can determine this by sensing the energy personally, using a divination tool, or asking for spiritual assistance from a guide.

Finding a stone is just the beginning. Gemstones are believed to work by channeling and building up spiritual energy, influencing the way it flows around and within us. This charge is maintained by meditation, prayer, or ceremony and keeping the stone cleansed, through techniques like smudging.

For an introduction to the properties of minerals, known historically as the "hidden virtues" of gemstones, see: