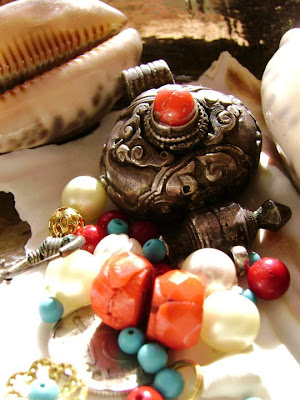 Working with minerals was once mainstream in the West, for hundreds of years. During the Middle Ages and Renaissance, gemstones were not only luxury goods, they were medicines for healing. Texts called lapidaries (Latin, lapidarius, “on stones”) described both their mineralogy and meaning, derived from classical sources, gem related Biblical passages, and astrology.

Their metaphysical properties were called virtus occulta (Latin, “hidden, secret, concealed virtue”). Virtue in this context does not mean morality but rather efficacy, the capacity for something to produce an effect. Most things had virtus elemantaris (Latin, “natural, elemental, manifest virtue”), an obvious quality like one of the four elements: some are warming like fire, others cooling like water, some make things wet like air, others dry things out like earth. Only some things had hidden virtues (virtus occulta), the most common example being lodestone.

Lodestone is a natural magnet, a variety of the mineral magnetite, that attracts and repels iron. Its hidden virtue, an influence over iron, was “hidden” because it did not correspond to an elemental quality (hot/cold, wet/dry); it could be understood intellectually, but not perceived directly with the senses. Other mysterious phenomena, like the negative electric charge of amber, were also included among the hidden virtues. (Scientific models of magnetism and electricity would not develop until the late 16th century.) However, most hidden virtues were similar to the metaphysical properties attributed to minerals today. According to a medieval Arabic lapidary, attributed to King Solomon:

“Some give favor in the sight of lords; some protect against fire; others make people beloved; others give wisdom; some render men invisible; others repel lightning; some baffle poisons; some protect and augment treasures; others cause that husbands should love their wives.”

Because they did not have qualities like the four elements, many attributed the hidden virtues to celestial influences instead. Following classical models, the universe was divided into two realms: the celestial one, filled with the fifth element aether, and the ever changing terrestrial one, home of the other four elements. The planets and stars were eternal, consistent except their position; their light, heat, and invisible influences were responsible for changes in the material world. Their motion was ultimately attributed to God himself. While magic might rely on demons, the hidden virtue of gemstones was seen as completely natural, created by God, originating in the Sun, Moon, planets, and stars.

THE ORIGINS OF ASTROLOGICAL CORRESPONDENCES

“God hath imprinted upon the Plants, Herbs, and Flowers, as it were in Hieroglyphicks, the very signature of their Vertues.”
~Robert Turner, 17th century astrological botanist~

Different animals, plants, and minerals were believed to have an affinity, correspondence, or rulership by a planet and/or zodiac sign. The terms vary by source. The 16th century German physician Paracelsus popularized the concept in herbalism, calling it the doctrine of signatures: a belief that many plants displayed signatum (Latin, “signature, mark, indication”), distinctive characteristics that indicated their healing uses. These signs were left by God, like wax impressions made by a seal, to reveal their virtues. The most common example was Saint John's wort, used to treat wounds; it appears to bleed when crushed, releasing a red oil, and has small holes in its leaves.

A material's astrological ruler was determined in a similar way:
Since Mars rules the blood, Saint John's wort could be a Martian plant, but is is traditionally Solar instead. It has yellow flowers with radiating stamens, blooms around summer solstice, the longest day of the year, and was used cross culturally to dispel darkness. The 16h century herbalist Nicholas Culpeper lists it as a “hot and dry” plant, the qualities also associated with the element fire and the Sun.

For information on Solar stones, see:


Gemstone Cures for the Sun

For information on Mercurial stones, see:

For information on Venusian stones, see: