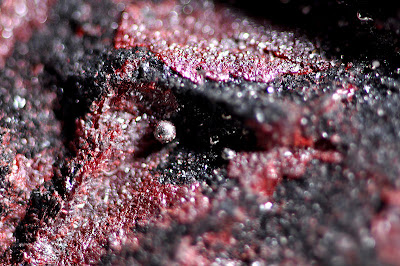 [A drop of liquid mercury on cinnabar.]

As the name suggests, the metal traditionally associated with Mercury is mercury. It is the only common metal liquid at room temperature. Also known as quicksilver, from the Latin argentum vivum (“living silver”), because it moves on its own like a living creature. It is gunmetal gray, heavy, and uniquely drawn to itself, rolling into little drops. Its chemical symbol Hg comes from its Latin name hydragyrum (“water silver”).

Mercury has a strong attraction to sulfur. The native metal is rare, since it usually combines with sulfur to form the compound cinnabar (HgS), sometimes known as “dragon's blood”.  (Also the name of a fragrant red resin, produced from several tree species.  There can be confusion in historical sources if the plant or the mineral is being referenced.)  Cinnabar is red, powdered to produce the pigment vermillion, a symbol of life giving blood. The mineral's combination of sulfur (hot, solar) and mercury (cold, lunar) represents the union of male and female energies in many spiritual traditions.

Mercury is toxic. It is included here for its symbolism, not actual use. Its dangers were known historically but the mineral's unique physical properties paradoxically associated it with transmutation, healing, and immortality. Cinnabar is generally safe, since the mercury is chemically locked up with sulfur, but can become dangerous if heated, ground, or ingested. Handle with care, washing your hands after.

The name “cinnabar” also refers to Chinese cinnabar lacquerware. Lacquer is combined with a pigment and applied layer after layer, to produce a durable and beautiful object. The red color came from cinnabar, other pigments are used today. It may also be a resin imitation instead, with no safety concerns, especially in jewelry.

Hematite is a popular energetic substitute for mercury since it resembles it when polished.

Many of the qualities associated with Uranus today, the unexpected, innovative, and esoteric, like the study of astrology, were once attributes of Mercury. Historically man made materials like glass, and blended substances, especially alloys like bronze (copper plus tin) were ruled by the planet. The metal mercury produces alloys with other metals very easily, called amalgams.

During the 18th century, many new metals were discovered, the most familiar being platinum, aluminum, and titanium. Platinum occurs naturally, but usually alloyed with other metals. The Spanish first encountered it in the Americas and named it platina (Spanish, “little silver”), thinking it was an inferior form of silver. Scientists determined it was a new metal in the mid 1700's. Aluminum and titanium do not occur freely in nature, requiring human effort to be produced. Interestingly, liquid mercury damages aluminum, causing the normally resistant metal to corrode. In contemporary astrology, these new metals are associated with the innovative planets Mercury and Uranus.

THE CHILDREN OF MERCURY

Not only do the planets correspond to certain areas of life, each is traditionally associated with specific animals, plants, and minerals. For example, the 16th century German writer Heinrich Cornelius Agrippa lists the following materials under the rulership of Mercury:

“Amongst metals, quicksilver (mercury), tin, and the silver marcasite (arsenopyrite); amongst stones, the emerald, achates (agate), red marble, topaz (may refer to any clear yellow stone but also peridot/olivine) and those which are of divers colors, and various figures naturally, and those that are artificial, as glass, and those which have a color mixed with yellow and green.”

(The notes in parentheses are mine. It can be difficult to correctly identify stones in historic texts. Names drift over time and minerals recognized today as different species were unknowingly seen as one gemstone, named by their color. For example, topaz once meant peridot and spinel was seen as a variety of ruby.)

There is a long tradition of using gems in India to counter balance problems with both the natal chart and transiting planets. Large, flawless stones, usually set in specific metals are prescribed. Each planet has a primary gemstone, if one of sufficient size can not be found or is too expensive, then an alternative in a similar color is used. The primary stone of Budha (the planet Mercury, not the historical teacher Buddha) is emerald and its secondary substitutes are also transparent and green: verdelite (green tourmaline), tsavorite (green grossular garnet), and peridot. Some lists also include precious jade, although it is translucent, not transparent.

The legendary figure Hermes Trismegistus, who combines traits of the Greek God Mercury and the Egyptian god Thoth, is also associated with emeralds. Many spiritual texts were attributed to him in late antiquity. The rediscovery and translation of some of them during the 15th century revolutionized Renaissance thought. At the time, he was believed to be an actual historical figure, presenting the wisdom of ancient Egypt. The most well known text is the brief Tabula Smaradina (Latin, “emerald tablet”), mythically first discovered on a tablet of green stone. (Although usually translated as emerald, the word smaragdus could refer to several precious green stones at the time.)

Astrological texts rely mostly on gemstones known in antiquity. Many new minerals have been discovered, others have become readily available, and familiar ones have turned out to be more than one species. Many other minerals now have correspondences with Mercury:

For an introduction to the metaphysical properties of minerals, known historically as the "hidden virtues of gemstones”, see: