The Astrological Body: Part One: The Planets and the Chakras 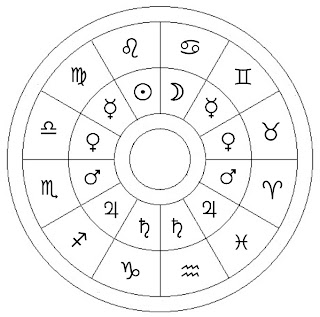 THE HOUSES OF THE PLANETS

As with anything associated with them, different sources have contrary correspondences for the chakras, zodiac signs, and planets. The most elegant version adapts the classical model of sign rulership, first described by the Greek author Ptolemy in the 2nd century CE. Traditionally every planet rules two zodiac signs, except for the Sun and Moon, which rule one each. These were known historically as the planetary domiciles, “the houses of the planets”, since the sign and planet have a similar nature.

In the Northern Hemisphere, summer solstice has the most heat and daylight, so the zodiac signs near it were given to the two brightest celestial objects, the Sun and Moon. Because both planet and sign are traditionally “masculine”, the Sun rules Leo. The Moon rules Cancer, because both are “feminine”. The other planets were then assigned two signs each, further down the zodiac wheel, in the descending order of their orbital speeds. Because winter solstice has the most cold and darkness, the zodiac signs near it were given to Saturn, the slowest moving of the classical planets.

The ruling planets of the zodiac signs:

There was a belief in antiquity that the planets held these positions at the moment of creation. If not literally, at least as an ideal model to explain planetary rulership. This mythical chart was called the thema mundi (Greek, “horoscope of the world”). The Sun was in Leo and the Moon was in Cancer. Mercury was in Virgo, Venus was in Libra, Mars was in Scorpio, Jupiter was in Sagittarius, and Saturn was in Capricorn. 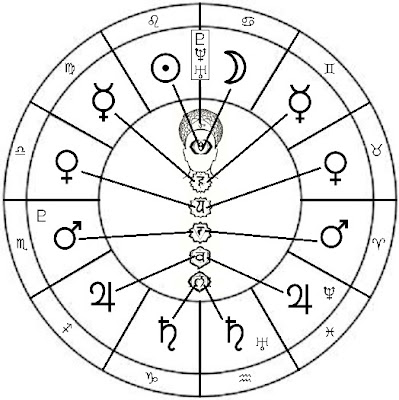 [The classical rulers as the origin of the planetary chakra correspondences.]


"Marvel not if we say that these are within thee, but understand that thou thyself art another world in little, and hast within thee the sun and the moon, and also the stars ."
~Origen, 3rd century CE Egyptian, Christian theologian~

Many chakra systems derive their astrological correspondences from these planetary rulerships. According to Hindu texts, energy flows through the subtle body along channels called nadi (Sanskrit, “movement, river, conduit”). There are three main nadi: one along the spine and two that wrap around it. One side carries warm “masculine” energy, like the Sun, and the other cooling “feminine” energy, like the Moon. The center blends them but is rarely active. A vortex of energy called a chakra/cakra (Sanskrit, “wheel, circle, turning”) is produced where they intersect, traditionally depicted as a spoked wheel or lotus flower. Although their number and symbolic associations vary in sources, the most popular version uses seven chakras, five along the spine, one on the skull, and one above it.

The borders of Leo/Cancer and Aquarius/Capricorn represent the spine and skull, the top and bottom of the main nadi. The six pairs of zodiac signs represent the solar and lunar side channels, wrapping around it, and their planetary rulers, six of the seven main chakras.

The chakras, planets, and zodiac signs:

The central nadi along the spine is associated with the lunar nodes. The North and South Node are two moving points opposite in space, created where the Moon's orbit crosses the ecliptic, the apparent path of the Sun in the sky. If a new or full moon occurs near one, an eclipse is produced. Unless consciously directed, energy rarely moves in the main channel. Like the nodes and eclipses, it represents a unique union of opposites: combining the hot/solar/”masculine” and cold/lunar/”feminine” energies of the side channels to produce kundalini. (Sanskrit, kuṇḍalinī, either from kunda “coiled, in a spiral” or kund, “to burn”.) A dormant spiritual force resting in the Root Chakra, coiled like a serpent. When awakened it travels up the spine like a ladder until it reaches the Crown Chakra, producing mystical union with God.

It is not unusual for lists of Indian correspondences to stop at the Third Eye, most elemental and sacred sound lists end there too. Although this popular model use seven chakras, it is traditionally called sat /shat chakra (Sanskrit, “six chakras”), because the Crown Chakra is so different than the others. As the symbol of divine union, it has few other attributes. The lower chakras are found within the body, it floats above the head. The others have three nadi, it only has one, the main channel that strands them all together. The two side channels stop at the Third Eye, representing the end of duality.

Fast vs. Slow: While the Sun and Moon rule Leo and Cancer, the other planets are assigned pairs of zodiac signs based on their orbital speed. After the luminaries for the Third Eye, the upper chakras correspond to faster moving planets and the lower chakras slower ones.

Light vs. Heavy: The elements are arranged heaviest to lightest. The upper chakras correspond to the most non-material and the lower chakras the most physical.

WHERE DOES PLUTO LIVE

Uranus, Neptune, and Pluto were not discovered until after the 18th century. Debate continues today in astrology what sign they rule or even if they have planetary rulership at all, since it upsets the symmetry of the classical model. Most contemporary astrologers believe Uranus rules Aquarius, Neptune rules Pisces, and Pluto rules Scorpio.