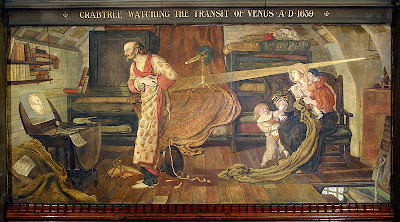 [19th century painting by Ford Madox Brown, of William Crabtree observing the Venus transit in 1639. He and Jeremiah Horrocks were the first astronomers to calculate and document the phenomenon.]

The term transit means different things in astrology and astronomy. In astrology, a transit happens when the current location of a planet interacts with an element of your natal chart. In astronomy, a transit happens when a smaller celestial object passes in front of a larger one. During a Venus transit of the Sun, Venus passes directly between the Earth and the Sun, appearing to move across the Sun's face as a black dot.

Halfway through its retrograde motion, most planets make an opposition to the Sun. Like the Full Moon, they rise in the east as the Sun sets in the west. Since Mercury and Venus are closer to the Sun than Earth, they can not make an opposition. Instead, they form a conjunction. Conjunctions occur when two planets are at, or near, the same degree of the zodiac. However, they rarely make actual contact, hanging above or below one another in the sky.

Venus turns retrograde every eighteen months. Each time, at its heart, it makes a conjunction with the Sun. However, only very rarely does that conjunction mean a Venus transit. They have a regular 243 year pattern: a pair of transits eight years apart, followed by a gap of 121.5 years, a second pair of transits, also eight years apart, and then a gap of 105.5 years. The last Venus transit was in June 2004, the next will not be until December 2117.

Astrologically, planets in a conjunction are strengthened, blending their energy. A Venus and Sun conjunction is interpreted fairly neutrally today.  Planets in conjunction with the Sun are classically seen as “combust”, hidden from sight by its light, and therefore debilitated.  Except when the conjunction is very tight, within the width of the Sun's disk itself, a planet is then "cazimi" (from the Arabic, "in the heart [of the Sun]"), temporarily well placed.  During the hours of the Venus transit, the planet is actually beneficially strengthened.


How can we bridge such radically different interpretations? The Sun represents our ego identity, conscious mind, and creative life force. Venus disappearing in its light is the heart of her retrograde lesson, asking us to personally realign ourselves with the elements she represents: one on one relationships, money and material goods, ethics and sources of guidance like mentors. Her themes will be temporarily strengthened, even potentially more challenging, but can be harnessed to radically transform the self, as she burns in the alchemical fire of the Sun.


For gemstones to harmonize its influence, see: