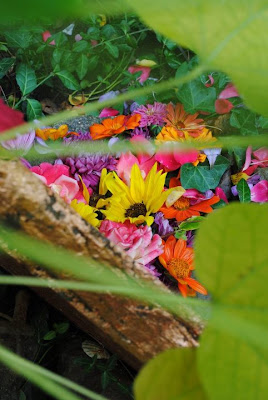 WALKING WHEN THE SUN STANDS STILL

A labyrinth is a patterned path, walked slowly to support contemplation, meditation, or prayer. Once you reach the center, you turn around and follow the same path back to the entrance.

Many traditions interpret labyrinths as solar symbols. The Hopi believe the seven circuit form represents Father Sun, with the cross it makes in the center, the four directions and seasons. Someone walking a labyrinth moves back and forth between two points, briefly pausing at them, the center and the entrance. This pattern mirrors the yearly path of the Sun. Depending on the season, it rises and sets at different points on the horizon, stopping twice to change direction. For those of us in the Northern Hemisphere, it reaches its southernmost location on the winter solstice and its northernmost location on the summer solstice. Solstice comes from the Latin solstitium, meaning “Sun stands still”. The Sun’s position on the horizon changes slightly daily, except around a solstice, when it stays the same for three days.

Because they represent the Sun’s path, walking a labyrinth is a potent tool to harness its energy. The solstices and equinoxes are the yearly solar equivalent to the monthly Moon phases. Energy is temporarily heightened, making them opportunities for deep meditation, ceremony, or setting intentions. Summer solstice is the longest day of the year, for the Northern Hemisphere. Its energy is therefore similar to Full Moon, supporting manifestation, bringing things to fruition, and facing inner or outer darkness.

Certain periods are traditionally auspicious for spiritual work on it, like the turning points of the Sun (dawn, noon, and dusk) and the specific time of the solstice: 7:09 pm Eastern Time, (23:09 Universal Time). Like a major lunar phase, the energy is strong for three days (June 19th – June 21st) but strongest on the actual date (June 20th).

I helped create the labyrinth at Whatever Works Wellness Center in Cincinnati, Ohio. Rather than follow a traditional pattern, the path winds through a small grove with statues, standing stones, and colorful prayer ribbons. It is open during regular business hours, Tuesday through Saturday. For more information, please call the store at (513) 791-9428, find us online www.whateverworkswellness.com, or at our pages on Facebook:

For more information about the symbolism of the solstice, see:

The Symbolism of Summer Solstice

For information about gemstones traditionally associated with the Sun, see:

Gemstone Cures for the Sun


To find a labyrinth in your area, check out this great Labyrinth Society resource: